Wesley’s birthday was a couple of weeks ago. September 15th. We celebrated on the patio at Bolsa in Oak Cliff with his our friends. I had heard a lot about Bolsa, but had yet to try it. Let me just say that it definitely lived up to the hype. From the service (pushing together tables to accommodate an ever-growing group of people), to the drinks (pomegranate sangria? YUM!), to the food (burgers, steaks, quail, pizza, to-die-for bruschetta, all as fresh as possible).  It was a 10 all around!

I made mini-cheesecakes for dessert. It was my first stab at these, and they went over really well. In fact, one of the girls asked where I got the treats from. When I responded that I made them myself, she was in awe. (OK, that might be a slight exaggeration. But it’s really nice to know that everyone enjoys something you worked so hard on) 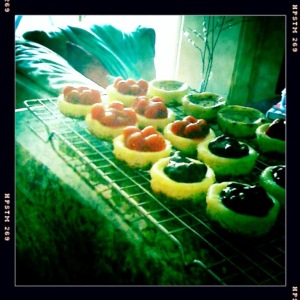 [Not the greatest picture, but it’s the only one I snapped.]

But the best part was that we were celebrating Wesley.

I feel so blessed to be sharing this part of my life with him. He amazes me more and more every day with his unfailing love and commitment. He’s one of the most intellectual and witty people I’ve ever known. He is supportive of everything I do/dabble in, and most importantly, my independence. Wes is always there to bring me back to reality and keep me grounded when I need it most. When I’m sad, he’s either a shoulder to cry on or a wanna-be comedian trying as hard as possible to make me laugh. He puts up with my silly nonsense and even plays along. I know I can count on him for anything, no matter how great the risk. I love him so much for that.

It’s a little late to say this on my blog, but since I have a knack for being late, I’ll say it anyways. Happy [late] birthday, Wesley!

This entry was posted in Uncategorized. Bookmark the permalink.